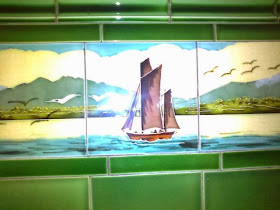 "Through in the west" is where our friends live. I'm surprised and interested that Veg Artist picked this out as being - as I suppose it must be - a Scottish expression. I can't think what other people would say. "Over in the west"? "Across in the west"? Maybe just "in the west"?

Here's another phrase, then. These pictures are of a "wally close". Is that clear?

Well, maybe not. That's certainly a Scottish way of putting it, particularly a west of Scotland way.

A close (pronounced "clo-" as in "clothes" and "-se" as in "cross" (so, maybe "cloh-ss") is a narrow lane between buildings or, in this case, the public entrance hall of a block of tenements (traditional flats). In Glasgow these were often tiled, partly for hygienic purposes but also to suit the taste of the time, which was probably the late 19th/early 20th century. Our friends had come across this particularly nice example so we popped in to have a look. 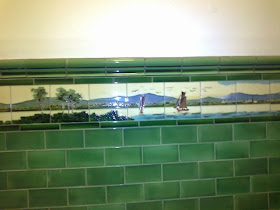 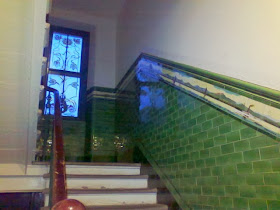 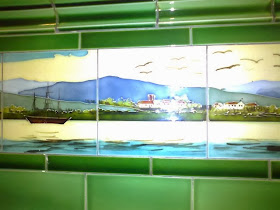 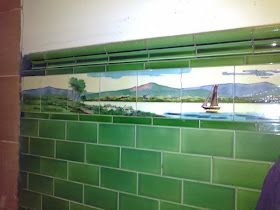 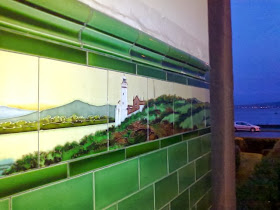 As you see, there are boats and a lighthouse and villages - a general coastal scene. 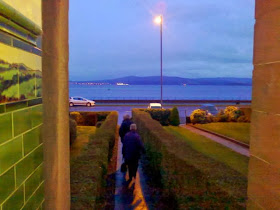 This is the view over the water which may have inspired them. 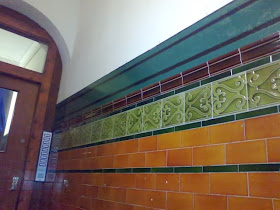 This is the next-door close - not nearly so artistic.

There are other "wally" things, for example wally dugs - those Staffordshire pottery dogs (etc) with flat backs that were made to stand against the wall on your mantelpiece.

And what might one's personal wallies be? As in "Ye'd better get yer wallies in - the meenister's at the door."

("Put in your false teeth - the minister's arriving.")

PS - if you're interested in the tiles, one of which says J Duncan, have a look at http://www.historicshopfronts.co.uk/files/The_Tiled_Shops_of_James_Duncan.pdf

The firm also did shop walls.